Today (January 14th) Lego officially realised The Lego Ninjago movie. This movie was quite exceptional considering Lego's standards in keeping movies family friendly. The movie is about 4 ninjas who group together when The Dark Lord Garmadon takes over.The 4 ninjas have to protect the four object's of spinjitzu and they must unite by creating the tornado of creation. The movie ends on a cliffhanger which suggests another film most likely in series 2 of the sets..... but no official realise has been stated yet. For any of you who have not yet seen this movie i would highly recommend it, it's next screening will be...

Saturday, at 11:00am EST - Episode 1: LEGO Ninjago: Masters of Spinjitzu - Way of the Ninja 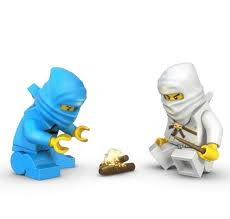 Overall this is a must see movie if you are a Lego fan! The only issue that people will notice is that the skeletons just as in other themes such as Pharaoh's Quest and The Adventures Of Clutch Powers are not very intelligent which is not very realistic, but incredibly funny. But for Lego this is great! For those of you who saw Lego Atlantis the animation style is basically the same.

Until next time, goodbye