OK guys.
I know what your thinking. This game has been out for quite some time now. And although I know that, I don't think it has received enough of coverage.

I'M HERE TO CHANGE THAT!

LEGO Rock Band was released to the public on the 3rd of November 2009 and is usually overlooked by people because of its change of the typical LEGO game rules. Besides its lack of publicity LEGO Rock Band i think is a fantastic addition to the LEGO games series and overall a very nice game. One of the things i loved was that they LEGO-ized very famous artists such as the 70's rock band Queen and some other ones too. 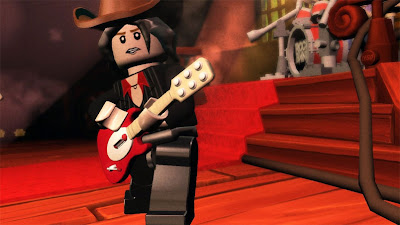 Its game design is basically the same likes of the Rock Band series and Guitar Hero. Although EVERYTHING IS LEGO! The song selection was a lot more modern than some other games but it also had a lot of genres and choices as well. THE MINIFIG CUSTOMIZATION WAS AMAZING!
YOU COULD EVEN CHOOSE DIFFERENT MICROPHONES AND GUITARS!