Well guys, 2011 has already been a very good year to lego fans of all genres, especially to Star wars fans and the soon to be released summer sets. But later this year, LEGO City fans should be pleased a lot by these new sets! Take a look!

First off, we have a "Marina", which looks very nice and seens to include an ATV-like vehicle, a nice speed-boat (that we can assume that will really float), some newer minifigs, and much more. Though a medium sized set, this looks like a product looks like it has a lot of play, and a nice variety of bricks. I am a semi-City fan, who only has a few of these sets, but even I (a diehard SW fan) might even consider getting this set! Here's a pretty nice and clear pic! 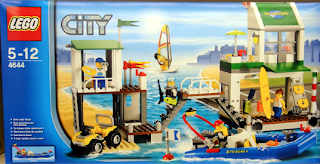 Next: the second of these two future sets is a "Powerboat Transporter" it isnt too special, all it mainly consists of is a diesel truck with a special trailer to carry the boat. It appears to have two minifigs, with a speedboat with markings like a racer. This set looks similar to any other truck design, but it looks like a nice design overall. Heres another pic: 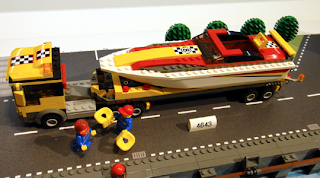 Thanks for reading and I will be doing a Pre-Review before it comes out. Thanks guys and stay tuned!
Posted by Clonetrooper Customs at 2/14/2011 09:28:00 PM