As most of you should know the long awaited LEGO Star Wars III Has finally come out And me, as a LEGO fan got it as soon as i could!
And may i just say.....I'm very impressed.
This game brought a whole new feel to the series. 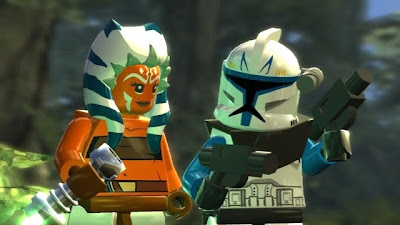 It managed to make you feel familiar to the whole game series but it also included a lot of new
things. It included all of the essentials of a LEGO game, Bricktastic levels!,Character Customization and even the Minikits are back!
Although it is the same type of game play and controls,The Clone Wars spin on the game made it highly entertaining.

As i played through the levels i became quickly familiar with what i was meant to do and how to do it, For example if there was a massive shut door with a republic symbol under it i knew i would have to use my lightsaber to cut through to get to the other side. 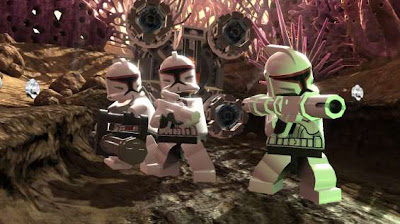 The lightsaber moves amazed me because unlike others of the series...each character has unique moves! When i was in between levels i found myself exploring the new AMAZINGLY MASSIVE Game Hub. This game must have had a new lighting engine because half the time you would have to pull out your lightsaber and use it to light your way. As you progress in the game you collect Gold Bricks which can be used to unlock new areas in the Game Hub. As most LEGO games are....THE POSSIBILITY'S ARE ENDLESS!
Another new cool feature is while flying in your ship you can land on other ships and use your lightsaber to fight hundreds of droids before getting back into your ship and flying away!
Commanding army's of clones is really exhilarating and you will be thrilled each time you capture a seperatist base!

I think it was a good decision to delay the game a while...it might of not been as good as now.

So guys Ill give this game a rating of....