May 2011 Lego Calender and Releases

The new May calender for Lego has just been released and with it is some great news regarding releases. Here is a list of the themes that will be released in May:

Alien Conquest
Pirates of the Carribean
And by the looks of the announcement picture maybe some new city sets!

According to the calender you will start seeing these in stores May 10!

I can't wait to see both the new Pirates of the Carribean and Alien Conquest sets, they look awsome and I will probably pick up a few of the sets (The cheapest ones) as soon as I see them.

There will also be an exclusive Lego Star Wars Minifigure (appears to be some form of ARF trooper) given away with a 75$ Lego purchase but that seems to only be from May 3-4so keep that date in mind!

I urge all of you guys to check out the Lego Calender to see some more exciting offers for May! and Here it is: 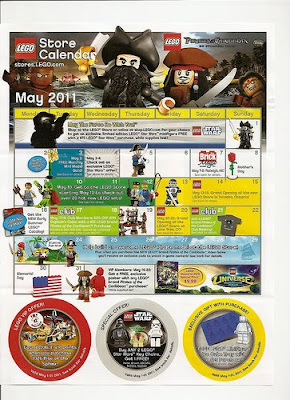