BrickArms- The best Modern Combat and World War 2 weapons on the market! But its not all about weapons says Will Chapman (owner and founder of BrickArms). In 2008 BrickArms put for sale, Oxford Helmets (Company that produces items close to LEGO). In the event, BrickArms had a huge success with the item. But as of late 2009, BrIckArms was unable to restock the item. Many fans where very disappointed to this event!
But finally in May 2010, BrickArms had brought back the classic helmet, but of his own! Fans where thrilled as they where finally able to buy helmets once more from BrickArms. At the time BrickArms released two helmets, the M1 Pot (American/Marine Helmet used during WWll) and the new BrickArms Stahlhelm!
The Stahlhelm came from Verdun to Berlin, German soldiers relied on the Stahlhelm for protection. It adds a lot of detail to you German soldiers for WWll LEGO MOC's! The BrickArms Stahlhelm is plastic injected (when plastic gets melted down and get molded under high pressure) using the same plastic as LEGO does (ABS).

As of now, there are five different colors (suiting different classes of the German Army during WWll) 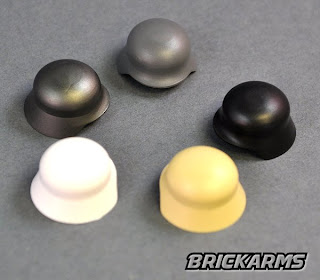 Email ThisBlogThis!Share to TwitterShare to FacebookShare to Pinterest
Labels: Brickarms, Lego on Sale