Minifigure of the Day

Hey guys, recently the staff has been discussing a new portion of the site and came to the decision that we should have a portion of the site that is new every day... So due to the abrupt end to the advent calanders who brought a lot of traffic to the site, TheBrickUpdate presents the: .....MINIFIG OF THE DAY! From now on this portion will be located in the sidebar and will be done by our newest author: LMANPwner.


GENERAL GRIEVOUS﻿
The second edition of the General Grievous figure, in my opinion is much better than the first. This version makes Grievous' arms and legs much, much more accurate to the EP3 and Clone Wars General. The only Con that I can see with this minifig is the overexagerated eyes on the head; but otherwise the head mold is very good. Now compared to the old grievious (2008): The old one simply had a white versin of the droid legs that did not move individually whereas the new ones are independantly mobile. Also the old head was simply terrible detail and the arms were just basically conected to the sides(all four of them) and made the figure look terrible. With some easy decalling, you can recreate his eyes and make this figure very good. 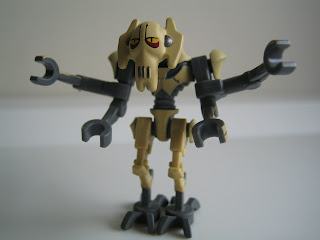