As I mentioned in my last review I recently picked up 2 of the new 2011 LEGO Star Wars January release sets from Wal-Mart. I already reviewed The battle of Naboo so now I will be reviewing the brand new 2011 Clone Trooper battle pack! 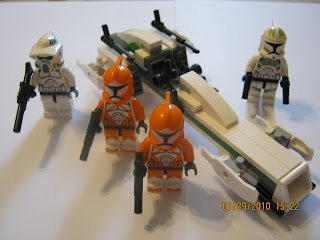 I got this set for 14.99 (Damn the Canadian prices) which is a pretty expensive price for 4 minifigures and a speeder. I would like too see it go down to around 12.99 but I doubt that’s going to happen anytime soon. I got this set for the brand new unique clones in it and the new ARF trooper figure which is very cool. I may or may not get another one it depends on if I find a good use for the troopers once I begin brickfliming. I also wouldn’t mind getting my hands on another ARF trooper. 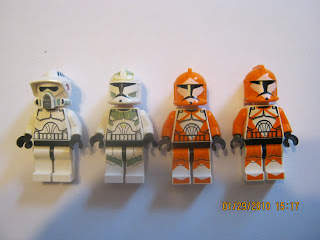 The set comes with 4 minfigures, 2 Bomb Squad Troopers, 1 ARF trooper and 1 Clone Commander. The minifigs are very highly detailed and look absolutely great. The Bomb Squad troopers have a head that is made of orange plastic with white printing which was a very cool change. The ARF troopers helmet looks amazing and is spot on to what I have seen of ARF troopers in the animated series. The Clone Commander minifigure is okay and is probably my least favourite minifigure of the set. He has cool printing and can be used as a Commando/Commander but I find his greenish markings a bit boring. The figures are almost too detailed as there quite a few miss printing on the helmets and body. Only a few are noticeable but upon closer inspection you can easily tell where printing was off. All in all the figures are very cool but I would have liked to see some white Clone Trooper minifigures so I can keep building my army (Currently at 8 :p)! 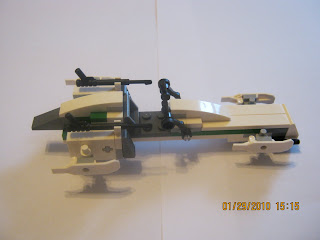 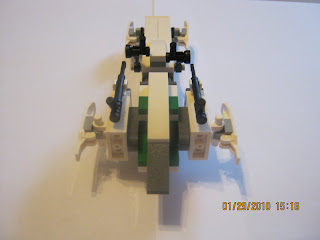 The BARC speeder bike that comes with the set is a great addition and is also very accurate to the design from the show and movies. I think the speeder bike will be a great selling point for the collectors and people looking to build an army just like the walker from the last Clone Trooper Battle Pack was. I like that the speeder was included in the set and personally think that putting in 1 cool thing in a battle pack is better then putting in 3 stupid things (See Mandalorian Battle Pack). The clone trooper minfigures fit in great and the handle bar designs are excellent. 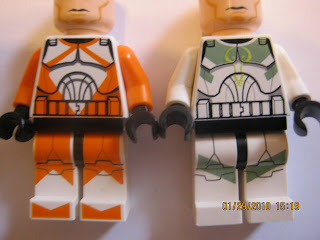 This set also contains 2 new pistol guns with scopes on top. I don’t really care for the LEGO guns so that does absolutely nothing for me. I would recommend ordering some guns from Little Arms Shop or other private arms dealers to outfit your Clone Army with.

I hope you guys enjoyed my second review and I thank you all for reading it. I am going to have too put my idea of video reviewing the larger sets on hold because the camera that I got has pretty bad video quality. I will probably reviewing one of the new smaller Ninjago sets next so make sure you check back here every day. Lets finish this with some Pros, Cons and number reviews.

Cons:
No white Clone Troopers
Slight misprints on the figures
LEGO’s guns but I guess I will have to solve that problem myself
Price is way too high