I was lucky enough to walk into my LEGO isle today just as the Wal-Mart lady was opening up the boxes for the new 2011 LEGO Star Wars sets. I walked over and grabbed a Clone Trooper battle pack but didn’t see a Battle of Naboo which is the set I was looking for. I came back 5 minutes later and found that she put the set out so I grabbed it and that’s what I am going to review for you guys today! This is my first review ever and kind of a test run so please mercy me if you don’t like it! 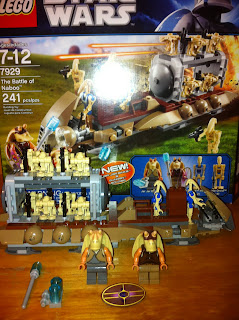 I got this set for 39.99 which is really expensive but that’s what us Canadians have too live with. One of the main reasons I got this set was due to the 10 battle droids and the awesome new Gungan minifigures. Another reason I got this set was because I had the original droid carrier when I was a kid and it felt cool that they made a new one this year. The new edition is based around the old one but it is much better built and much cooler looking.

The set itself looks very cool and is very well built with some great features. The part of the carrier with the droids on it can be taken off and stripped down which makes it very easy to load and unload the carrier with droids. The set is very easy to take apart but doesn’t come apart easily if that makes any sense too you. What I mean is that its built so you can take it apart easily but during play or setting it up Etc it will not fall apart on you. The way the droids are put on is awesome and the front area where the droid pilots go is also very nice and well detailed. 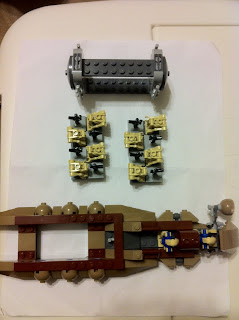 The minifigures here are awesome and the droids are good for a droid army builder or they just look great on the carrier. The new Gungan figures (Jar Jar Binks and a Gungan Warrior) are great and the heads are highly detailed with great coloring. The torso’s are also very accurate and colored nicely. The new Gungan shield is the coolest accessory I have seen in a long time and looks exactly like it did in the movie. 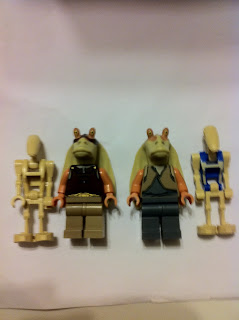 All in all I love this set and I would recommend getting it first as it is basically the only Star Wars January release set I will be getting besides the Battle Packs. This set gives you the most value for your money as it contains 12 minifigures in total and 2 awesome looking Gungan figures. 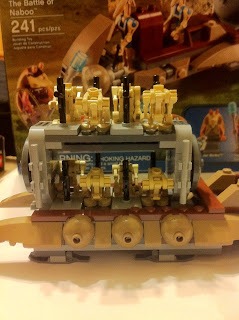 The only problem I have with this set is that it should have been a bit bigger considering it is called The Battle of Naboo. This set could have had a few more Gungans and some of their equipment which would have made it really seem like the Battle of Naboo that we saw in Episode 1.

I will wrap this review up with some Pros and Cons and then some numbered reviews.

Cons:
I think the set should have been a little bigger
The crazy Canadian LEGO prices but I guess that has nothing to do with this set

Overall: 9.5/10 This set is awesome and the first if not only set you should get from the January 2011 LEGO Star Wars release. Thanks for reading everybody and I hope you all liked my first ever review. leave a comment telling me what you thought about it or tell me in the chat.