Mace Windu's Jedi Star fighter, seen in the Star Wars the Clone Wars episode: R2 Come Home, is not really a set that you;d think would have any importance. But I must say, Lego nailed it! Not only is it just a starfighter in this set, but you also get two STAP vehicles, an Confederate Officer Speederbike (very similar to Count Dooku's speeder in George Lucas's Episode II: Attack Of The Clones), the fighter itself, and a very, very nice and very useful tactical droid.

First, I'll start with the figs; they include: Mace Windu, R8-B7, two normal battle droids, and a tactical droid. I'll start with teh Tactical droid: His head and body are a new cast and are very nicely detailed. Plus, I think he will come in very usefull: He will fill the command gap between droid commanders and Greivous/Ventress. Next comes a recently debuted: R8-B7. In TCW, R8 had an unfortunate encounter with a Gundark which left him a beeping scrap heap which explains for his lack of appearances in Lego products. Anyway, Lego captured his exotic purple color sceme very well and is probably one of my favorites so far. Otherwise, Mace Windu, and the battle droids are the same.

Next, for the vehicles: included in this set are Mace's Delta-7 Aetherspite Light interceptor, Command speeder bike, and two STAPs. To start with the best part of the set, the starfighter is very nicely recreated in bricks but the only thing I could see as a con with it is that there arent any guns on the top or bottom. The designers at TLC (The Lego Company) really outdid themselves on this one. Next, there's the speeder bike which I must say, is splendidly built with its near perfect accuracy to both TCW and Episode II. [To get a closer look at an example, see Clone Wars Season 1 Episode 17: Blue Shadow Virus.] There are a few decals on this speeder but its designers did a great job with placing bricks to create the integrity of the speeder and its hull shape. Finally, the STAPs are exactly the same as the one seen in the 2008 At-Te.

Well thats about it guys, I will next be Pre-reviewing the summer sets and after that, the summer sets themselves. To see a further video review check out: http://www.youtube.com/watch?v=jZZnJi2vFsM . Thanks guys, and come back for more reviews! 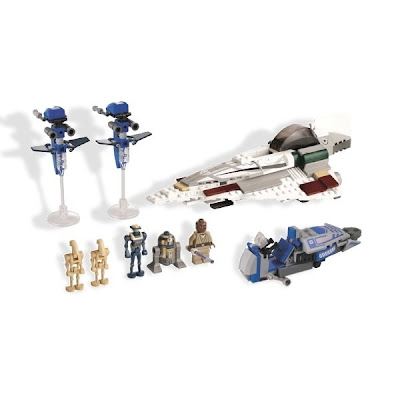