As most of you know recently the Demo for LEGO Star Wars III was released on the XBOX live marketplace! Many of you have been requesting for us to review the fantastic sneak peek of the game and we like to fulfill your wishes.

To download the game is quite simple.
And its COMPLETELY FREE.
Now because its the demo it only includes two levels.....and although that is a little disappointing they obviously couldn't hand out the full game for free! The two levels are set on greivious's ship, The Malevolence. Basically its just like an episode of the Clone Wars except your in control. 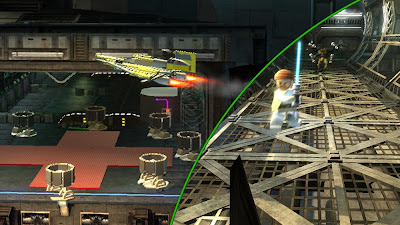 The fighting mechanics I found were a lot cooler and more fun compared to the other games before, and even included new moves like lightsaber throwing and controllable force powers.
The force powers really stood out and I was amazed at the new things i could do.
The cutscenes were REALLY well animated and still included the usual grunting and noises that have grown custom to the series. The game mechanics are a little different but not really noticable..it had the same feel to most of the games and was just easy going and fun!
One of my favourite parts was the split screen co-op play.
Sometimes Obi Wan would be trapped and you would have to switch characters long distance to get him out.
If you liked the first LEGO Star Wars games you are going to love this!!!
9/10 Bravo!! Bravo!!
Posted by D-Motion Pictures at 3/16/2011 12:49:00 AM